Thank you for your patience while we retrieve your images.

Home»All my photos»Bahamas upon Avon 4 August 2019

Created 6-Aug-19
Modified 6-Aug-19
Visitors 74
21 photos
The double chimneyed LMS Jubilee 4-6-0 No 45596 Bahamas has paid a return visit this summer to Tyseley following the completion of its extended overhaul at the beginning of this year. This time it was to haul some trains from the Vintage Trains summer schedule, including one of its summer Sunday double runs from Birmingham Snow Hill to Stratford upon Avon.
Booked on the afternoon round trip, we arrived in time to hear and then see the immaculate and noisy locomotive charging up the 1 in 45 incline in the tunnel from Moor Street to emerge into daylight at Snow Hill. Quite quickly, Bahamas ran round and coupled up for the tender first run back out to Stratford. After collecting more passengers at Moor Street and Tyseley, we turned right onto the old main line towards Cheltenham through the Birmingham suburbs and lush Warwickshire countryside. With tender first running limited to 45 mph, this seemed to be the time to enjoy our afternoon tea box, with prosecco and coffee to wash it down.
The layover at Stratford allowed us to watch the run-round, and then observe this magnificent locomotive basking in the sunshine. On leaving with Ray Churchill at the regulator, we crept over the crossings till we were clear of the station throat. But then it felt that the regulator had been pushed to the roof and we barked away briskly towards the 1 in 75 Wilmcote bank. We hit the bottom at 38 and sped fell away only slowly to 31 mph. Turning right at Bearley towards Hatton, we ambled along with a maximum of 34 around Claverdon.
Over Hatton West and North junctions we reached the main London – Birmingham GWR/BR/Chiltern line, and finally, a chance for Ray to open the engine up on a “billiard table” high speed main line. We reached 63 in the slight dip before Lapworth (passed at 61), then Dorridge at 63, Widney Manor at 69 and 72 through Solihull. We hit a maximum of 74 before Olton but the brakes went on hard as we approached Acocks Green, to prepare for our stop at Tyseley. Then we ambled back into Birmingham in the sunshine at the end of a pleasant afternoon out with a fine locomotive.
Categories & Keywords
Category:
Subcategory:
Subcategory Detail:
Keywords:
© Peter Hewitt's Transport Pictures 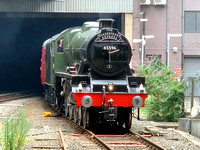 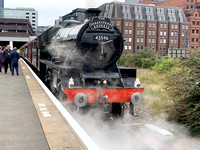 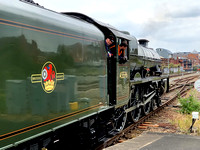 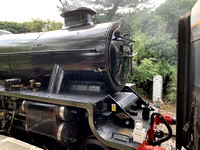 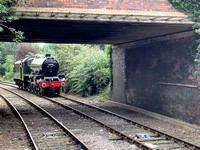 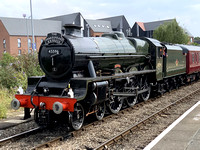 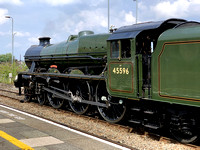